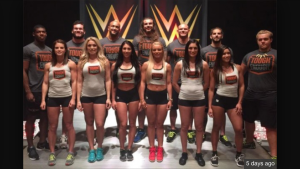 This past Tuesday night the first episode of this season of WWE Tough Enough debuted on the USA Network. This season there are many different aspects to the show as in years past and I’m going to get into all of them down in the closing thoughts section but before then, let’s get into some highlights from the show…

Hank Gets The Hammer- One of the things that we found out about this year’s Tough Enough is that the final say in who gets voted out will be the WWE Universe. This didn’t bode well for Hank who, as I said in my power rankings, really didn’t endear himself to the crowd & came off either timid or rude in the few times he was featured on screen. To make matters worse for Hank his comments about ZZ being the weakest contestant there, and that included the women, really rubbed Paige the wrong way as she felt the comment was a shot at women in general. It’s a bit of a shame as I do feel Hank should have played the “I’m an average Joe” card way before the final 30 seconds as that could have given him that extra four percent of the votes needed to beat Joshua. In the end, Hank is still young enough to give it a go in the wrestling business, it just won’t be on Tough Enough this season.

Tanner Scoffs At The Competition- Last night saw Tanner Sacareno blow away the rest of the competition en route to winning every one of the physical competitions. What made this all the more interesting is that Tanner isn’t as strong as some of the other contestants like Joshua, Mada, Alex & the departed Hank. Rather than taking the humble route, Tanner also then became the cocky villain of the season by telling everyone how much better he was than them and then backing it up! This was particularly surprising to see so much personality from Tanner because you didn’t see much from him at all prior to the first episode. The thing to watch with Tanner is his interactions and continued tension with Patrick. Patrick is the only trained wrestler on the show and, you can make the argument, wants it more than any of the other contestants.  Patrick has also called Tanner to task (while the two almost came to blows) for only being in this competition for the money and after he gets the money he’s going to run right back to MMA.  Patrick also vowed that at some point he will beat Tanner, which will be interesting to see if it happens.

The Ladies Bring The Heat– From a competition standpoint the most impressive candidate was Dianna.  Unfortunately, this was the only part of Dianna that I was impressed with.  This girl has gotten the opportunity of a lifetime to become a WWE Diva and win $250,000 and she’s already struggling to live without her fiancé and has openly complained about having to sleep on a twin size bed.  I have no idea how she wasn’t in the bottom three and despite her being physically more dominant than the other female contests, I don’t see her having much longevity in this competition.  The only other one of the female contestants to make an impression during week 1, for me, was Gabi.  Gabi went from dancing on the stripper pole at the club to causing more drama on the show by questioning Dianna’s injury and then shrugging off claims that nobody likes her.  The big knock on Gabi prior to the first episode, so much so that she was cut due to it, was her attitude.  It was surprising to see Gabi continue to show that attitude off.

The Miz talks tough- Tough Enough wasn’t the only event to debut on Tuesday night for WWE.  Immediately following the Tough Enough show, on the WWE Network, Tough Talk debuted and was hosted by the Miz.  The 30 minute program really did a great job in showcasing each of the tough enough finalists as they each faced questions from the judges and the Miz.  I was particularly impressed with the Miz who came off great and is such a natural in the role.  I also found that the interplay between the judges and the Miz was a lot of fun and much more relaxed than even the Tough Enough show.  Go out of your way to check this show out.

In the end I really enjoyed the first episode of tough enough.  It is a good amount different than the previous seasons of tough enough in that the material isn’t recorded ahead, but rather, takes place live.  The show is set up in such a way that the live aspects of the show are intertwined with highlights that took place throughout the week which is cool because the viewers still get all of the drama and the major happenings from the throughout the week.  From there, each one of the judges choose one contestant to go into the bottom three for the week.  Each one of the judges also has one save that they can utilize at any point in the season.  From there, the fans have roughly 5 minutes to vote for the contestant that they want to see stay in the competition, and they can do this on wwe.com, twitter or via text message.  This means that the contestant who receives the smallest percentage of the vote is voted out of the competition.  I like the inclusion of the fan voting, and I’m actually a little surprised by it.  If it’s up the fans, I’d be really surprised if someone like ZZ were to ever get voted out by the fans based off his character and charming personality.  The one change I would make is that I would give the fans a full week to vote out one of the contestants because having only five minutes really doesn’t give those fans not watching live the opportunity to vote.

Well that’s going to for me this week but be sure to check back tomorrow where I’ll be updating the power rankings for this week and I can guarantee you that there will be a lot of changes to the list this week.  Until then what are your thoughts on the new season of Tough Enough?