Skip to content
HomeThe Spotlight On The Survivor Series Pt. 2- 1996 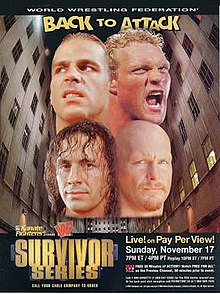 This was the first Survivor Series to hit my local area of New York City was Survivor Series 1996.  This was a pretty memorable Survivor Series for a few reasons as it featured a really memorable debut, a great comeback, a breakout performance for one of the WWE’s biggest stars in history and the first time I noticed the live crowd noticeably booing the babyface champion.

The first thing I really remember about this event was that they had all of the matches listed in WWF Magazine prior to announcing them on television. I thought this was pretty cool and if you think about it, WWF magazine came out about a month before the pay per view and you were getting the entire Survivor Series card and then you consider that going into the final episode of  Monday Night Raw before Survivor Series next week we still don’t have many matches officially announced for the show.

I distinctly remember that a mystery man was named for team Yokozuna and that there were also a few guys making their debuts on the show. In the opening tag team elimination match Doug Furnas and Phil Lafon would be joining the Godwins to fill out there Survivor Series team. Later in the show, Flash Funk would be debuting and joining Team Yokozuna and then a newcomer by the name of Rocky Miavia would be debuting and joining Team Marc Mero. I thought it was pretty interesting and a cool idea to introduce new superstars to the WWF scene by doing so at each one of the traditional survivor series matches that night.

It’s interesting to note that the night before this show, there was a hall of fame induction ceremony in which “Superfly” Jimmy Snuka was inducted. He’d go on to be that mystery tag team partner for team Yokozuna and I remember it being a really big deal as obviously Snuka had a long standing history in Madison Square Garden. With that whole match being centered around the return of Jimmy Snuka, I remember this really overshadowing the debut of Flash Funk. Flash ended up being Too Cold Scorpio from ECW and almost to a T had the character of Brodus Clay about 16 years before the Funkasaurus shook his romp for the WWE universe.

As far as the other two debuts, Furnas and Lafon were pushed huge in the opening match of the night, becoming to sole survivors of the night and defeating Owen Hart and The Britsh Bulldog along the way. Unfortunately, nothing really became of Furnas & Lafon in the WWF.

The final debut was Rocky Miavia and to this day I think it was one of the best debuts in the history of WWE. Rocky got a huge push during his first night with the company as he overcame the odds to be the sole survivor for his team. He was built up as a huge star which was a little weird because I recall no videos or anything promoting the guy prior to his debut but still once he came through the curtain you knew he would be a big star. Obviously most of you know by now, he went on to become The Rock!

From there the show, from the poster above, was built around two big matches which first featured Stone Cold Steve Austin vs. the returning Bret Hart. This was Bret’s return to WWE after 8 months following his loss of the WWF world title to Shawn Michaels in the Iron Man Match of Wrestlemania 12. The match was so good but is often overlooked because of how much more emotional the match five months later between the two was at Wrestlemania 13.

Yet in the end the part for me as a kid that I remembered most was when the MSG crowd turned on Shawn Michaels in unison. I should point out that at 10 years old, I never was able to notice when certain crowds began turning on Hulk Hogan in the later days of Hulkamania running mild in the early 1990s WWF. Thus for me, at 10 years old, and a huge Shawn Michaels fan at that, I was completely confused when Shawn came down the aisle with his mentor Jose Lothario and was booed out of the building for the remainder of the night. Understand that this wasn’t like the WWE of today where on any given night John Cena can be booed out of the building, this was still during a time period where good guys were cheered and bad guys were booed, at least in the WWF. Instead, Psycho Sid (who in fairness broke character to my seven year old sister and explained he really wasn’t so bad, after she cried hysterically at one of his signings out of fear, and then hooked my family up with wrestling tickets for that night so he always had fans in my house) was cheered the entire night as if he was the conquering hero despite being one of the biggest heels in the company. It’s really a sight to be seen if you go back and watch this show especially if you put it in the context of that time in WWE.

Psycho Sid with my sister circa mid 1996

That concludes my look back at the Survivor Series 1996 which was really a historic show in many ways when you think about it. Overall a fun show that really introduced me to what a fun show a raucous NYC crowd could be. Watching from home that night I wished I was there live to be a part of the crazy MSG crowd, but I would have to wait six years for that..