Skip to content
HomeThe Spotlight On Disney On Ice: 100 Years Of Magic 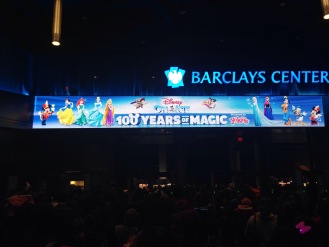 This past Wednesday evening, as I mentioned in the daily spotlight blog that day, I was able to check out Disney On Ice: 100 Years Of Magic at the Barclays Center in Brooklyn, New York. With the show running the Barclays Center over the weekend and around the US over the next couple of months, I thought it would be fun to give you guys some of the highlights of the show. Without any further ado, let’s get right into it. 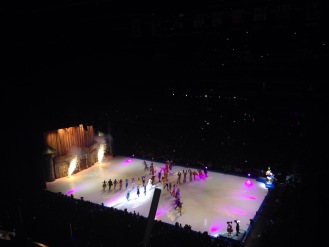 1) The Disney Experience In Your Neck of The Woods- I had a chance to chat with one of the ladies on line with her family at the concession stand and she mentioned how her and the family come see Disney On Ice every year. She explained that it’s a bit pricey for the whole family to get down to Florida or California every year and so this is a more affordable way for the family to still get some Disney on their life. I couldn’t agree more! Being as big of a fan of Disney as I am, it really felt that for the two hours that this show was going on that the Barclays Center was transformed into Disney World. There were photo ops, souvenirs, Disney themed desserts and people wearing costumes (Mickey ears and mini princesses were everywhere) filling the lobby of the Barclays Center. On top of that with over 50 classic Disney characters and 14 different stories, you really got a similar Disney experience that you would come to expect at the shows featured in the parks. 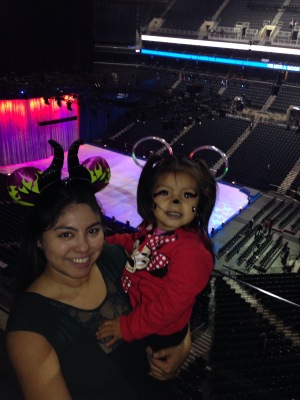 2) Fun For The Whole Family- I attended the event with my girlfriend and our 3 year old god daughter and while she enjoyed seeing the princesses and Frozen there was a lot there for my girlfriend and I to enjoy as well. The classic four Disney characters, Donald Duck, Goofy, Minnie and Mickey (where was my boy Pluto by the way?)  act as the narrators of the show and continue to appear in between the different stories to talk about Disney history and to introduce the different characters. From there many of the classic Disney stories from The Little Mermaid to Beauty and the Beast to even Pinocchio get their time to have their story told and we had our chance to feel like a kid in the process (there’s even a segment dedicated to “Its A Small World”). The finale featuring the Lion King is a sight to be seen and features all of the characters in a way that only Disney can do right. 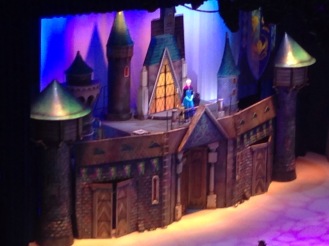 3) Frozen Fun- That’s right, for I believe possibly the first time ever Frozen is now a part of the “100 years of Magic” show. Not only is it featured but it has the most time dedicated to it with about 30 minutes including all of the classic characters and songs. It is quite the sight to see 16,000+ people at the Barclays Center singing “Let It Go” in unison. I will say that I think if you want to see Frozen included with all of the classics you should go sooner rather than later because Disney is as smart as they come and, if they haven’t done so already, it’s only a matter of time before Frozen gets its own “Disney On Ice”. 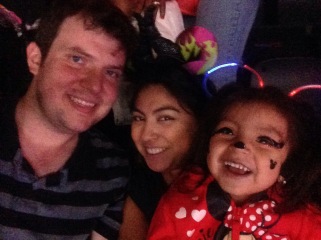 Overall this was a lot of fun and I would definitely recommend it to any fan of Disney.  There were definitely a few times where I had to remind myself that the performers were all on skates as they were incredible in how much they could do without a stumble, they were simply flawless. One thing that did surprise me was that there wasn’t a classic character or two available for photos. They did have the classic Disney sets where you can take take a picture with Anna, Cinderella or Mickey & Minnie butt they were all cardboard cutouts. I can tell you that I would have gladly paid for a photo had it been the “real” characters. That’s just a small constructive criticism though because in the end this was definitely worth it and 2 hours flew by and kept our 2 year old goddaughter engaged the whole time. If you’re in the New York City area, Disney On Ice: 100 Years Of Magic runs the Barclays Center through November 16th! 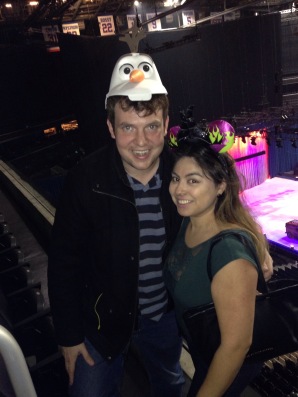 If you have specific questions feel free to leave them in the comment section below or hit me up on twitter @TommyOnTheSpot.