Skip to content
HomeThe Rumble of The Royal Rumble- 1989

It’s probably important before we move on that I point out that the first Royal Rumble event I ever saw live was the Royal Rumble 1991.  That said, the Royal Rumble 1989 and Royal Rumble 1990 were two shows that I saw about a million times growing up.  Since these shows were some of the few available at my local Blockbuster and some of the few events I didn’t own, I went out of my way to rent these tapes every time I had the chance to do so.  My parents were smart and knew that if we didn’t record the pay per views when we ordered them, I would want to buy the tapes as soon as they came out.  Thus, I owned pretty much every WWF pay per view on VHS cassette from 1991-2005 or until Digital TVs came out and made it tough to record on video cassette.  Thus, every other show that was available at Blockbuster made it’s way to my house every Friday when my father would go down to get us a movie.  It seemed like the videos at Blockbuster only went back to 1989 so in many ways this 1989 Royal Rumble was the beginning of my wrestling fandom, at least wrestling that I could remember.  With that out of the way let’s get into my thoughts of the Royal Rumble 1989. 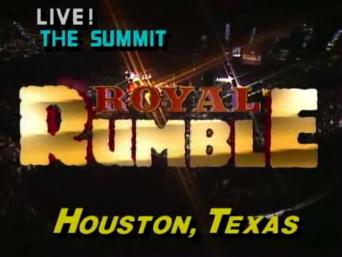 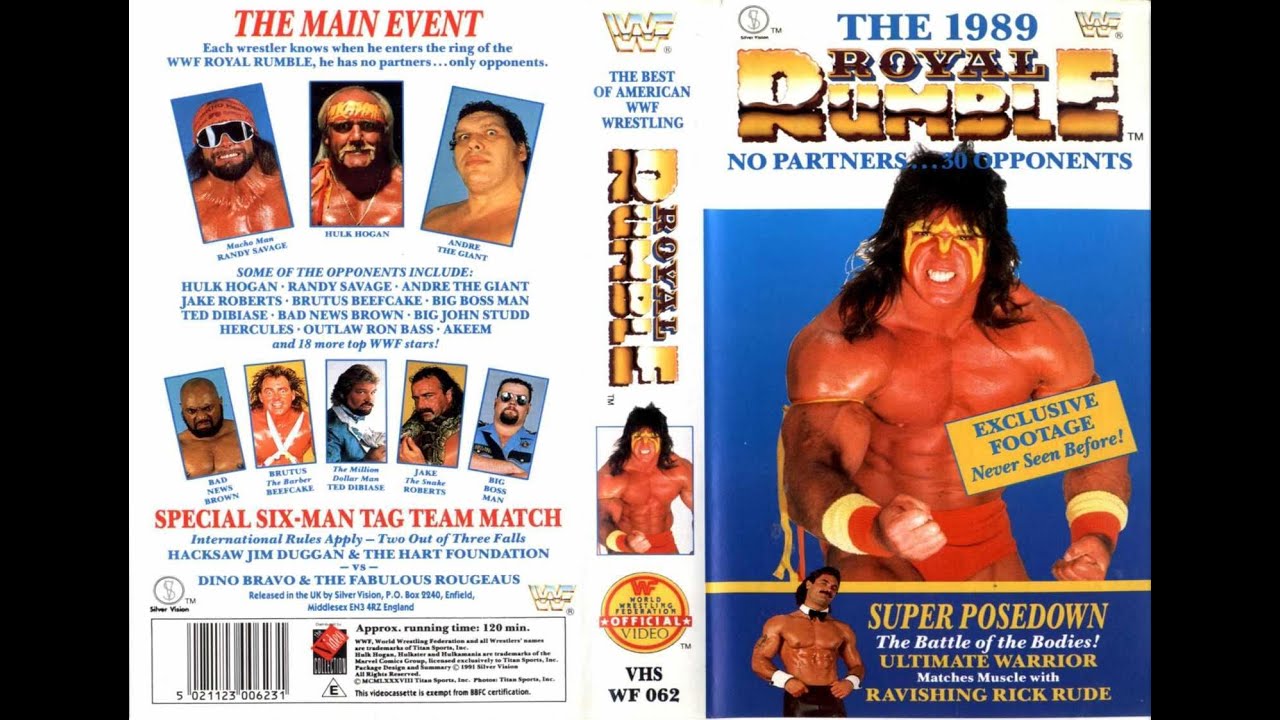 This was the first Royal Rumble to be presented on pay per view and also the first Royal Rumble to feature the, now famous, 30 participants.  Unlike the first Rumble event that we went over last night, the Royal Rumble is the complete focus of this show from start to finish.  There are only three other matches and other than a really fun six man tag opener, the other two matches were largely forgettable.  If you’re in the mood for Royal Rumble nostalgia then this is the show for you.  Right off the bat we’re greeted with the video montage of all of the Royal Rumble participants as Vince McMahon runs down all of the participants before proudly proclaiming “ITS THE ROYYYYYAAAALLLLL RRRUMMMBBBBLLLLLEEEEEE!!!!!”  in classic Vince McMahon announcer voice.  They only continued this for the first few Rumble pay per views but damn I loved these videos.  They got you so excited for the rest of the show and made everyone mean something by having their video features pop up on the screen.  Also, if you weren’t following along at the time, it introduced you to all of the participants. 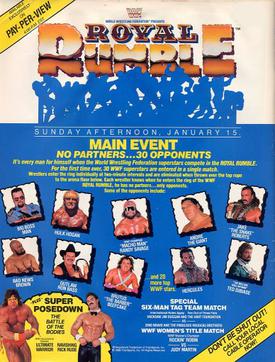 From here throughout the night there was a variety of vignettes that ran with a number of the participants choosing there spot in the rumble at random.  These were a lot of fun and got you ready for the match later on that night as they would set up good teasers as to the numbers each guy got based on their reactions to the numbers picked.  The big one I remember here was that The Million Dollar Man Ted Dibiase went ahead and purchased a more favorable number from Slick, who at the time was managing the Twin Towers.  Then from there this was the debut of the classic Royal Rumble promos that would run throughout then night and feature some of the bigger names standing in front of their logos via green screen.  These always did a lot for me because they set up a number of potential winners for the Rumble.  It was obvious to me that with all of these different pieces that WWE wanted to build up the Rumble as just as important as the other big three pay per views, which had already debuted as annual pay per view traditions.

As for the Rumble match itself, believe it or not, this one ranks up there as one of the most unpredictable Rumbles of all time to this day.  Remember, at the time, the Royal Rumble was not for the main event spot at Wrestlemania.  Therefore, with no clear reward for the winner, WWE was allowed to take a chance with the winner.  If you look at some of the Royal Rumble participants, it reads like a late 1980s who’s who of talent.  Huge stars like Hulk Hogan, Randy Savage, Curt Hennig, Andre The Giant, Jake Roberts, and The Million Dollar Man Ted Dibiase, to name a few, were all in the Rumble this year and you know what? None of them went on to win this match.  Instead, the winner of the match was Big John Studd who had just returned from a 2 year retirement a few months prior, turning face in the process.  The Studd win came out of nowhere as he didn’t even have a match at Wrestlemania 5 and would be gone from the WWF just six months after this.  While it was really cool to see someone win out of nowhere, looking back it would have been nice to see Ted Dibiase get the win.  He was such a hot heel and always seemed to be right there to get that tip top spot (Wrestlemania 4, 1988 Main Event, the Royal Rumble 1989) but never quite seemed to get over the top for a variety of reasons. 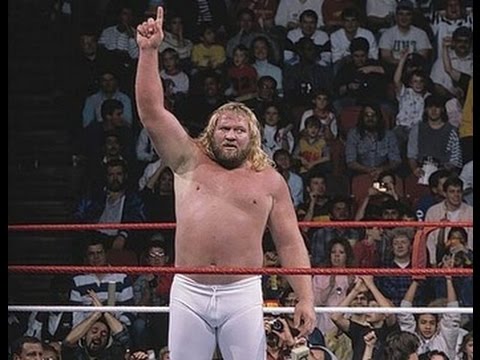 There were also a couple of Rumble themes that debuted with this show. The first theme of course was that there were no friends and only enemies in the Royal Rumble.  This was no truer than Ax of Demolition drawing number 1 and Smash of Demolition drawing number 2 and then actually wrestling each other until teaming back up when Andre The Giant entered at Number 3.  Speaking of Andre he introduced us to our next theme of everyone in the ring coming together to try and eliminate the big guy in the match.  This always made for a nice visual and never quite worked with Andre who eliminated himself due his fear of snakes after Jake Roberts threw his snake back into the ring.  As stated earlier, there wasn’t anything on the line in the Rumble but that didn’t mean that this Rumble didn’t have major implications on Wrestlemania later that year.  The aforementioned Andre The Giant and Jake The Snake Roberts would go on to have at match at Wrestlemania but we would also see a bit of hype for that year’s Wrestlemania main event.  This was still during the year long build for the Hulk Hogan/ Randy Savage match at Wrestlemania 5 when the two were still teaming as the Mega Powers.  The tension between the two would continue to build throughout the year and nearly reached a climax here as Hogan would accidentally eliminate Savage.  Looking back, why was Savage the heel in this feud?  Hogan was always being the one to screw Savage over! 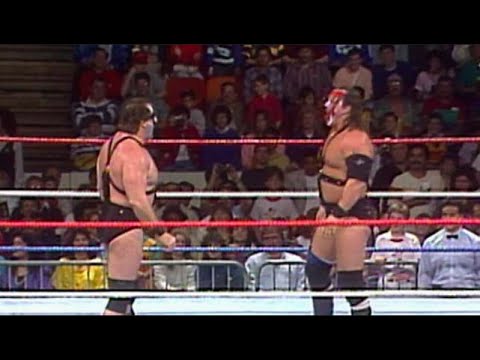 Aside from the Rumble, the one thing that I remember most from this show was actually the posedown between Rick Rude and The Ultimate Warrior.  This was one of the silliest segments I can remember, even more hokey than the Dino Bravo bench press from the year prior, but as a kid I watched this segment almost everytime I rented this tape.  This was during the time period where the WWF was at its peak with the larger than life bodybuilder types on the top of the card.  This was still over a year before Vince McMahon would launch the World Bodybuilding Federation but you could tell how passionate he was about Bodybuilding with segments like these.  Jesse Ventura was classic again in this segment really putting over each pose.  Unlike the year before, the Ultimate Warrior was now on the rise in WWE and was likely held out of the Rumble match so that he could be protected and given his own segment.  While it may have been hokey, it was cool to see WWE doing something different and the result of this posedown would be the start of the Ultimate Warrior/ Rick Rude feud that would last over a year and give the Ultimate Warrior some of the best matches of his career. 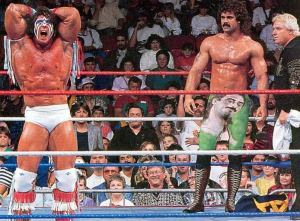