Due to medical reasons, effective immediately, I am announcing my retirement. Tonight on Raw, I'll have a chance to elaborate. #gratitude

Well the above tweet really says it all, Daniel Bryan has officially announced that he is retiring from in ring action.  Bryan (34) has been out of action since a smackdown taping last April 14th in which he suffered a concussion, shortly after winning the intercontinental title at Wrestlemania.  Bryan had been hoping to gain medical clearance from the official WWE doctor, Dr. Joseph Maroon but had been unable to do so, despite gaining medical clearance from the doctor who worked at last year’s Superbowl.

While it is no doubt heartbreaking to long time fans of Bryan’s work (and I’m at the top of that list), WWE has to be commended here for taking concussions so seriously.  Bryan has been a part of WWE since 2009 and went on to win the World Heavyweight Title in 2011 and winning the WWE world heavyweight championship on 3 separate occasions, the last of which was in grand fashion at Wrestlemania 30.  As big of a fan as I am of Bryan the in ring performer, i’m a bigger fan of Bryan the person and his health and well being have to come first.

This tweet was released a little over an hour ago and I’ve already received a number of text messages from friends asking if this is storyline.  I suppose it’s possible being as Bryan teased a retirement announcement prior to announcing his return to the Royal Rumble back in 2015.  That said, I’d be pretty surprised to see that this is a storyline and I beleive it’s pretty legitimate.  Raw emanates from Seattle, Washington tonight, just a short distance from Bryan’s hometown in Aberdeen.

We’ll have a definitive update as more information is released and full coverage of Raw as well.

Hello everyone and thank you for checking out this week’s spotlight on wrestling podcasts where today we’ll take a look at a podcast that actually aired this morning and I was able to listen to it on the way to work, Sam Roberts Wrestling Podcast with Daniel Bryan. I was going to hold this off until I finished Bryan’s book and release the review during my planned Daniel Bryan weekend (8/7-8/9) but I figured since it was timely and topical, I would release it today. The past week has actually been pretty tough to be a wrestling fan with all of the awful comments made by Hulk Hogan being released, as Hogan was one of the faces of WWE history. Well, over the past week, one of the few bright spots has been that Daniel Bryan has been making the rounds across media outlets around the world to promote the release of his new book, which was released just last Tuesday. Bryan has a likability to him that can’t be taught and I’ve gone out of my way to listen to a number of his appearances from Cheap Heat to Boomer and Carton in the morning to Busted Open Radio on sirius xm radio. Thus, this morning, i was really happy to see Daniel Bryan’s name pop up on the Sam Roberts Wrestling Podcast. I’ve been a fan of Sam’s podcast since it started, subscribing on itunes along the way. I like Sam’s podcast because he seems like a true fan and often has some cool stories during his “state of wrestling” portion of the program including different wrestling road trips he takes. While Sam is a fan, he’s able to get pretty big names on his podcast and manages to have a good rapport with his guests while not shying away from the “hard-hitting” questions. Let’s get into some of the highlights from the show.
Highlights: Daniel Bryan’s Plans for the Intercontinental Title: For me one of the big things i got out of the podcast was hearing that Bryan actually wanted the intercontinental title for quite some time. His plan for the title was that it would be defended every week but it would only be defended on smackdown and pay per views. His idea was that it would give people a reason to tune into Smackdown and give the intercontinental title the profile that it deserves. He went on to say that he much preferred the brand split, feeling that if it wasn’t for the two separate world titles, he would have never had the chance to be world champion. Bryan also went on to state that he felt that the separate brands really do a good job in allowing guys to be featured that may otherwise get lost in the shuffle despite their talent such a Cesaro and Heath Slater.

The Future For Daniel Bryan: Bryan was very honest during this interview, flat out saying that he had a concussion and while he’s been cleared by his own doctor, he’s waiting on WWE’s doctors to clear him. Sam asked a good question to Bryan in asking if he planned on wrestling until he could no longer do so. Bryan responded that Brie’s plan has always been to have her first child by the age of 32-33 (she’s 31 now) and that he expects that she will likely be ready to have the couple’s first child when her contract with WWE is up. Bryan went on to say that he’s ready to be a father and, while he didn’t say that he was going to stop wrestling once he became a father, he did note that when Ted Dibiase Jr had a child, he continued on the road and Bryan noticed how miserable Ted looked. Sam and Bryan then both agreed that it becomes harder to deal with some of the hardships associated with being a wrestler (the travel, the politics, etc) when you know you can be at home being a father.

The Summerslam Match that never was?– One of the things that I found pretty interesting was when Bryan talked about his Summerslam 2012 match that was set up between he and Charlie Sheen. He explained how at the time Bryan was a heel but he was getting cheered against everyone other than CM Punk, who he had already wrestled a few times. Thus, WWE didn’t really know what else to do with Bryan as a heel. He went on to explain that he wanted the match to happen so bad because he felt that if it happened the idea was for Bryan to be the heel and for Sheen to be the face but Bryan had no doubt that Sheen was going to be booed out of the building had the match happened. Of course, from all of this, we got Team Hell No, so it wasn’t all a waste, 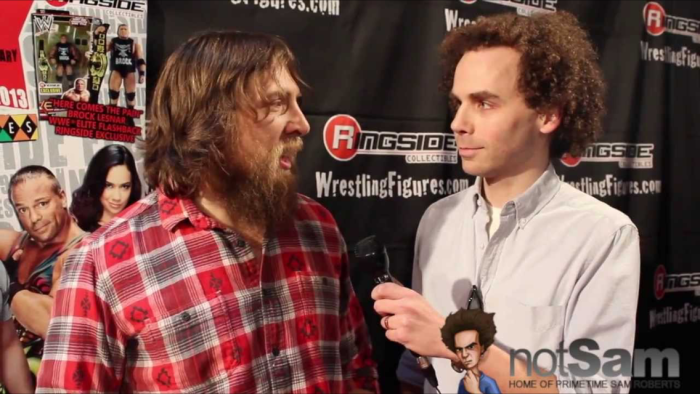 In the end, I really enjoyed this interview. I felt Sam did a good job in really going out of his way not to ask the same questions that everyone else did about Bryan’s book (even citing an article out there listing 10 things learned from Bryan’s book and then asking questions based only off of those 10 things because they really didn’t know too much about Bryan or WWE). Other topics covered in the over 30 minute interview included Bryan’s thoughts on his time in the original NXT, the struggles of avoiding overexposure when you’re featured on 12 segments in one week of television, why he feels that WWE doesn’t view him as marketable even to this day and whether or not he and Sheamus will ever get their WrestleMania match. The main thing I noticed form this discussion, and other appearance from Bryan throughout the week, is just how positive Bryan is despite the tough times he’s gone through over the past couple of years.

If you’re interested in hearing Daniel Bryan’s full appearance on the Sam Robert’s Wrestling Podcast, as well as Sam’s past podcasts, you can do so by clicking here http://www.stitcher.com/podcast/sam-roberts-wrestling-podcast . I’d love to know your thoughts on the show and as always some of your wrestling podcast suggestions for me to review right here. Until next time, take care.