Ah Yes the Royal Rumble 1991, a show that I’ll always hold near and dear to my heart and it just may very well be a show that I’ve seen more than any other pay per view in WWE history.  Before we get to the show itself, I’d like to provide a bit of backstory as to where I was at the time in terms of being a fan.  Most people can’t tell you exactly how they became a fan but I can.  Well, I was only 4 years old so we’re talking these are my absolute earliest memories of wrestling and in life for that matter.  Towards the middle of 1990, my father was also a huge wrestling fan.  Every Saturday and Sunday my mother would work and this lasted for about five years from when I was about 6 months old until I was about 5 years old.  Thus, every weekend my father would hang out with me and we’d sit right in front of the television set watching wrestling.  We would watch 3 hours on Saturday afternoon and 3 hours on Sunday afternoon from the time that I was still in a carriage.  I really believe that from these moments wrestling became ingrained in me and I never turned back.

In 1990, my dad found a friend at work that was able to order the pay per view events.  He and my father split the cost of the shows and my dad’s friend would watch and record the shows and then hand them off to my father so he and I could watch the following week.  At the time, all you had to do at the time was avoid a little results section in the newspaper so it wasn’t like today in the world of Twitter, Facbook and insane amounts of WWE programming where you can’t avoid results for more than an hour.  In any event, once 1991 came around, this was really when cable television started to become big and so I remember on the day of the Royal Rumble there were men in our house all day.  They were blowing holes through the wall and making a ton of noise for what felt like all day.  I kept asking my parents what was going on but they just kept telling me it was a surprise.  When the men were done, my father had revealed that we had gotten cable television.  This meant that, for the first time ever, we were going to be able to order the Royal Rumble live on pay per view.

It was just an incredible idea, the likes of which I thought that I would never see.  It was just unheard of for me at the time to fathom that what I was watching on television was what was going on live at that moment.  I must have asked my parents, “so this is happening right now?!?” all night long. None of my other friends were getting pay per views and wouldn’t for quite a few years so I became the wrestling insider amongst my friends at the age of just 4 years old.  It is because of this that I will always hold this event in a special place in my heart.

Sgt. Slaughter (with General Adnan) defeated The Ultimate Warrior for the WWF Championship

The Mountie (with Jimmy Hart) defeated Koko B. Ware 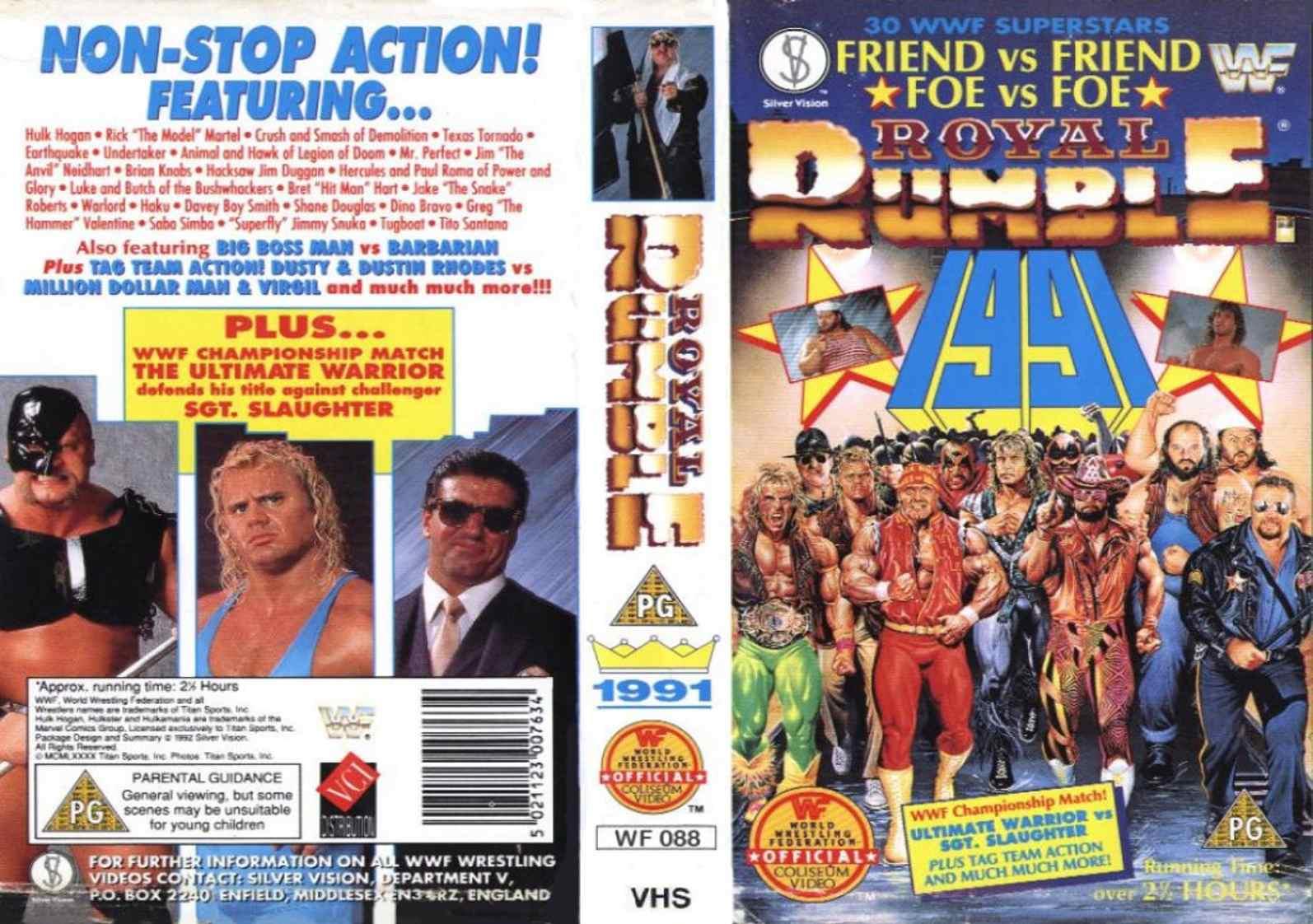 First things first this is the debut of the Royal Rumble theme song.  If you go  out and order the new “True Story of The Royal Rumble” blu ray set (which I suggest you do, it’s a fun watch) that’s the song you hear and it’s the song that’s the most synonymous with the Royal Rumble show.  This was also the show if which they started the really fun ad campaign with the poster you see above promoting all of the major superstars in the match.  I thought these were really cool and way ahead of their time. After a couple of years of the Royal Rumble being the complete focus on the show, it was as if this was the year where they made the Rumble event mean more overall.  This was the first Royal Rumble event which featured a World Title Match as well as the Rumble match.  In many ways, the title match was a bigger story than the Rumble match itself because it marked the end, in many ways, of the Ultimate Warrior experiment.  The Ultimate Warrior had won the world title from Hulk Hogan at Wrestlemania 6 and had seemingly taken over as the face of the company.  However, business was down with the Ultimate Warrior as the face of the WWF and he just din’t click the same way that Hulk Hogan did when he was on top.  Thus, the decision was made to take the title off of the Ultimate Warrior at this show as Sergeant Slaughter defeated him for the belt.  Sergeant Slaughter had recently returned to wrestling and was now doing his Iraqi sympathizer character.  The decision to put the belt on Slaughter was a controversial one being that the US had legitimately gone to war in the with Iraq during the Gulf War.  Dave Meltzer described it in the Wrestling Observor Newsletter “Many within the WWF front office feared a media backlash against such an obvious attempt to heavily exploit the war” and “But in this case, the hypocrisy is just too much for me. The company can claim all day long not to condone the character, but it was the president of the company that was the creator of the character and the man who decided to make him champion at the height of the hostilities.” This year during the Royal Rumble, Hulk Hogan would go on to win the Royal Rumble which made sense.  Even thought the Rumble match was not yet for the shot at the WWE World Heavyweight Championship, it was clear that WWE was going back to Hogan to defend the US against Slaughter.  Thus, he was the logical choice for the Rumble win especially when he went on to dedicate the Rumble to the troops overseas.  Afew weird things in this Rumble started with the fact that Nasty Boy Brian Knobbs was in this match but Jerry Sags was not.  There was also an entrant who did not enter as the announcers were left wondering who it was supposed to be, it was Randy Savage but I don’t believe any explanation was given.  The incredibly racist Saba Simba also made an appearance in this Rumble as did a very young Shane Douglas.  The iron man in the match was Rick The Model Martel, who last over 52 minutes.

Looking back at this show, the match of the night was actually the opener, a really fun match between the Rockers and the Orient Express.  The match is actually featured on the latest “True Story of The Royal Rumble” DVD set and is a lot fun.  This was towards the end of the Rockers run but they were always the best team to put on first and get the crowd going with fast paced matches, this night was no exception.

Lastly, on this packed show, it’s also important to mention that this was the night in which  Virgil finally turned on the Million Dollar Man Ted Dibiase.  This was one of my favorite stories ever told as it was laid out over 3 years from the Million Dollar man’s debut in November of 1987 all the way up until January of 1991.  Virgil was the man servant of Ted Dibiase and was treated like crap.  Finally at the end of their tag match against Dusty Rhodes and a very young Dustin Rhodes, Virgil finally had enough and stood up for himself, laying out Dibiase in the process.

Looking back, while this may not be the best Rumble match itself of all time, it’s one of my favorite Rumble shows of all time.  What do you think about this show?  Did you think WWE was too much in utlizing the real life issues going on at the time between the United States and Iraq for this angle or do you feel that all is fair in love and wrestling?  Let me know in the comment section below or over on twitter @tommyonthespot.