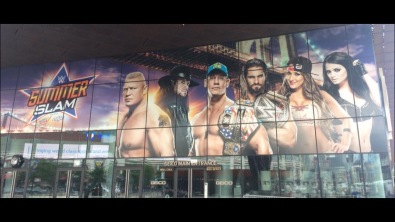 Hello everyone it is officially SummerSlam weekend!  I have been pretty busy this past weekend as I was a part of a wedding and then literally had a vacation day yesterday in which I spent the entire day catching up on my sleep as I know this is going to be a long and exciting week in the New York City Area and so I am committed to bringing the best Summerslam coverage possible.  I work here in Brooklyn and there is definitely a Wrestlemania esque buzz (and a Wrestlemania esque traffic) in the air.  There are many different events going on in the New York City area as well as television appearances and autograph signings all over the place.  We are lucky enough here at thedailyspotlight.com to be attending several of the different events associated with Summerslam week and will have you covered from pillar to post. Whether it be live coverage or coverage from one of our correspondents, we will have a packed week of content for all of you guys right here.  If you are attending any of the events this week and would like to be a correspondent for thedailyspotlight.com (After all I am only one person, I work a full time job and only have so many hours in the day) you can do so by sending me an email at thedailyspotlight2@gmail.com.  We welcome live event coverage and perspectives and will give full credit your way if you’d like it (you can choose to remain anonymous as well).  With that said let me get into the different Summerslam themed activities and coverage you can expect this week on thedailyspotlight.com

Wednesday:
The Spotlight On Triple H’s NXT Taker: Brooklyn Media Conference Call-  Later today there will be coverage of Triple H’s conference call that he hosts before all of the different NXT Takeover specials specifically for members of the media.  I will be back later today from the biggest highlights from the call this afternoon.
SummerSlam Night At MCU Park- Tonight I’ll be attending the Brooklyn Cyclones’ MCU Park for Summerslam Night.  Prior to the start of tonight’s Brooklyn Cyclones game, there will be a celebrity charity softball game between a host of celebrities and the NYPD and FDNY.  Ryback, Charlotte, Eva Marie and Fandango will all be on hand both playing in the game and signing autographs at the park.  There will also be different prize giveaways and contests from both WWE and Tapout.  I will be back late tonight or early tomorrow with pictures and highlights from that event.
Thursday:
Thursday is an absolute packed day of different events going on for the WWE Superstars and Divas.  Obviously Thursday night is the final stop for WWE before Summerslam but aside from that John Cena will be hosting the 9:00 hour of the Today show and also appearing on the Tonight Show.  I saw some of the highlights from John’s first appearance on the Today Show and thought he came off like a real natural in the role.  I know that Paige and Seth Rollins will be signing autographs at Toys R Us Times Square and Kevin Owens will be signing in New Jersey.  Aside from all of that…
Sam Roberts Live-  On Thursday night in New York City, Same Roberts will be hosting a live podcast and q & a with Corey Graves and Paul Heyman. I’ve been invited to attend and plan on doing so (though I will getting my eyes dilated earlier that day so this will be interesting to say the least).  Sam’s shows are great and I’m looking forward to the event at the famous Caroline’s Comedy Club.  Look for pictures and highlights from that event on Thursday night .
WWE 2k16 Press Conference- Also Thursday night in New York City is a media event for WWE 2k16.  There isn’t much more information that that is out about it but we will also have the highlights of that event, likely Friday morning .
Friday-Sunday-
During Summerslam weekend there are a number of superstar appearances going on at the Barclays center.  Priced at $150 per session you can meet Randy Orton, Shawn Michaels, Dean Ambrose, Roman Reigns Sting, Paige, Charlotte and Becky Lynch as well as a host of others.  I’ve never done one of these VIP signings but I’ve heard great things.  The Superstars and Divas spend a bit more time with each person who’s paid to meet them and also include a nice professional photo.  If you go check out any of these appearances, drop me a line.
Ranking The Summerslams-  Beginning Friday morning and continuing throughout the weekend, I’m going to be ranking all of the WWE Summerslams in the history of WWE.  From 1988-2014 all of the summerslams will be ranked by yours truly starting from 27 and going all the day down to number 1, the greatest summerslam event of all time.  I’ll also give a first hand account of several different Summerslam events that either I attended live or I remember being around for.  The countdown will kick off this Friday morning.
Predictions-  Summerslam isn’t the only big show this weekend, Saturday night NXT:Takeover comes to Brooklyn.  On Friday I’ll be running down all of the matches scheduled for NXT:TakeOver and giving predictions for that show.  Then on Saturday, I’ll be back to run down the complete Summerslam card with predictions from all 10 of the matches.
Saturday-
NXT Panel-  Saturday morning at the Barclays Center there will be an exclusive NXT Panel Discussion featuring Triple H, Seth Rollins, Finn Balor, Sasha Banks and many more.  The panel is said to last for 90 minutes and will include a Q & A.  This should make for a good prelude to the NXT Takeover special that same night as the topic is NXT.  I’ll be on hand and will have highlights from the event.
Ultimate Warrior Day-  This Saturday afternoon 3-5 there will be an Ultimate Warrior book release convention in Brooklyn.  Dana Warrior (The widow of the ultimate warrior) will be on hand for a meet and greet and it’s also being promoted that many of the Warrior’s memorabilia including the official Ultimate Warrior Statue will be on display.  I’ll be attending that event and will be back with photos and highlights from that event as well.
NXT Takeover: Brooklyn- Not only am I attending NXT: Takeover live on Saturday night but I’m doing so on a double date. Anyway for the first of three nights I’ll be at the Barclays Center this time, for NXT live.  Be sure to check out my live event highlights and photos.
Sunday-
Summerslam– Not since my very first live pay per view (Summerslam 2002) have I been this excited for a Summerslam live.  I’ll be on hand for the four hour mega event so you can expect the usual highlights and photos from a live perspective on Sunday night.
Monday-
Monday Night Raw- Gotta Give WWE credit for selling out the Barclays center three days in a row.  Kudos to them for making Summerslam into such a massive event filled with as many events as you would often find solely during Wrestlemania week.  I actually took a half day from work so that I can catch my breath before heading back to the Barclays Center for a third straight day.  I hope this Raw is similar to those post Wresltemania in that it also has that must-see feel.
Closing Thoughts: 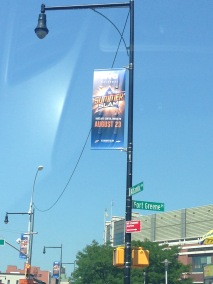 This is going to be a very fun and long week filled with a number of events.   This is really like a surprising wrestling paradise normally only reserved for Wrestlemania weekend.  Being in New york City, I can tell you that it really feels like Wrestlemania around these parts.  As pictured at the top of this piece, WWE has a number of Summerslam posters hanging throughout the Brooklyn area and the Barclays Center has been decked out with a number of WWE Superstars and Divas featured prominently.  WWE has done a good job in making sure that Summerslam has that big event feel and I’m hoping it stays in New York for the foreseeable future.  That’s going to do it for now but stay tuned for all of the coverage coming up this week on thedailyspotlight.com
Advertisement