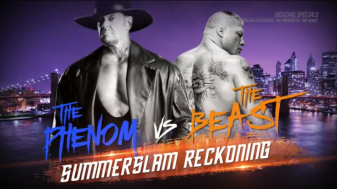 With just 13 days until their epic rematch at WWE Summerslam, the WWE Network ran a special last night focusing on the history between Brock Lesnar and The Undertaker.  The special, which aired right after Monday Night Raw, featured comments from different WWE superstars and legends about their opinions regarding both the Undertaker and Brock Lesnar and their rematch at Summerslam. Let’s get right into some of the highlights from the piece.

1) It Was The Day The Music Died–  The 23 minute long, documentary style piece did a good job of starting with a brief overview of the Undertaker’s undefeated streak from Wrestlemania and how much it meant to the show.  Everyone from Edge to the Big Show to Shawn Michaels (all former opponents of the Undertaker at Wrestlemania) were interviewed on the piece and did a great job in explaining that while you would see titles change hands at Wrestlemania, you would never see the streak broken.  I always enjoy the packages focusing on the Undertaker’s past opponents from the different Wrestlemanias if for no other reason, then to see the difference in the Undertaker and how that character has continued to evolve over the years.  This then transitioned nicely into a piece about what happened when Brock Lesnar broke the Undertaker’s streak.  Being their live for Wrestlemania 30, I can tell you that this moment was undoubtedly the most insane crowd reaction I’ve ever seen.  Dean Ambrose says it best here by saying that in one moment an entire stadium full of people’s jaws dropped in unison. They then show the Undertaker walking off at Wrestlemania 30 as they played an eery rendition of his theme song played on the piano, as everyone wondered if it was the last time we would be seeing the Undertaker.  The crowd shots are really what will make that moment live in infamy (here’s to you incredibly shocked bulging eyes guy) 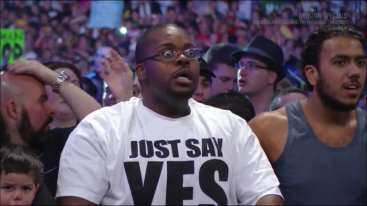 2) Suplex, Repeat-  From here, the piece did a really nice job of going over Brock Lesnar’s reign of dominance in WWE over the last 18 months following Wrestlemania 30.  Everything from Brock’s win over John Cena at Sumerslam last year to the birth of Suplex City at this past year’s Wrestlemania is covered in depth.  I think the Big Show said it best here when he said “At first you didn’t want to see the streak end but as time went on you thought, well if there was ever going to be anyone to do it, Brock Lesnar would be the guy to do it”.  I also really liked that they had interviews with Roman Reigns and Seth Rollins, guys who’ve face Lesnar over this span and who gave first hand accounts of what it was like to compete against Brock Lesnar.

3) The Rematch- In the end, the piece leads up to the big return for the Undertaker at Battleground and the brawl between the Undertaker and Brock Lesnar the next night on Raw.  They then turn to a few different superstars to get their thoughts on what this rematch at Summerslam means to both Brock and The Undertaker.  Triple H points out how much this match means to the Undertaker because he has to protect his  legacy, while Paul Heyman explains that this will be the final match for the Undertaker and that Brock Lesnar will finish him for good at Summerslam.  This was a really good idea because it gave the rematch between Brock Lesnar and The Undertaker that big match feel that it so truly deserves.  After all if all of these superstars and legends are returning to discuss a match of this magnitude, you should believe it’s a match worth going out of your way to see. 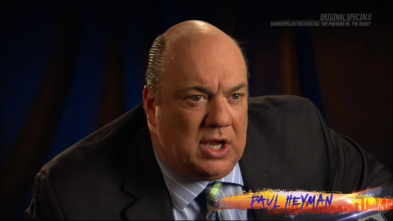 In the end, I thought this piece did a great job in building up the main event of Summerslam.  There isn’t any reason with the WWE Network that they couldn’t put together a special like this for each of their big show main events.  It reminded me, to a certain extent, of the UFC packages they put together to promote a big fight.  I liked that rather than having the two men in the match talk about it, you had their peers discussing the match instead.  Tome part of the appeal of both the Undertaker and Brock Lesnar is their mystique and that you don’t see them as much.  Overall, this was a really strong network specialthat everyone should take the mere 20 minutes to go out of your way to check out.

That’s going to do it for me but I also have a review up of last night’s big Raw from Washington, as well as a piece I did on Slipknot’s Summer’s Last Stand Tour from last week, here in New York.  Check out both of those pieces and let me know what you think. Thanks, as always, for all of your support.

All photos courtesy of the WWE Network

Monday Night Raw just went off the air and emanated live from Oklahoma City, Oklahoma tonight.  I think Raw did a good job in continuing down the road to Summerslam but before we get into some of the highlights on the show, there were some news bits that came out of Raw that set us up for the weeks to come in WWE that I’ll briefly touch on.  At the top of the show the Authority announced that WWE Summerslam will now be four hours long.  I know this was announced earlier in the day but I think it’s a great idea as it makes Summerslam a big deal and almost like the Wrestlemania of the summer.  I really think WWE can move Summerslam to a stadium show soon enough and wouldn’t be surprised to see Summerslam held at the Red Bull arena next year, or hell, maybe even Metlife Stadium.  Also on Raw it was announced that Stone Cold Steve Austin’s WWE Network Podcast will be returning after a one month hiatus.  His guest will be none other than Paige! I saw some stuff on Twitter surprised it wasn’t Sting or Undertaker (would have been a good time for Taker with Summerslam a few weeks away) but I think Paige is a really unique guest and I’m interested to see the chemistry between her and Austin.  If Austin is going to do these podcasts more frequently, it can’t be a top guy every time and with the give divas a chance initiative, I’m glad to see Paige as the choice here.  Truth be told, I believe that f4wonline reported that Hulk Hogan was supposed to be the guest this time around, and obviously that isn’t going to happen.  Let’s get into Raw!

John Cena is Beyond Tough- First things first, I thought that Seth Rollins and John Cena had one helluva match and if this is the direction that they’re headed for Summerslam, then I for one can’t wait.  I wasn’t crazy about Seth Rollins tapping out but if the story is that Cena beat Seth when defending his title so he deserves a shot at Seth’s World Title, well then it made sense.  With that out of the way, kudos to John Cena for wrestling the last ten minutes of the match with a brutal looking broken nose.  His nose looked contorted with blood gushing everywhere from his nose after an errant knee to the face from Rollins.  Say what you will about Cena but he’s as tough as they come and showed that old school “the match must go on” mentality last night.  Even if Cena requires surgery, and I assume he’s going to, I don’t expect that anything is going to keep John Cena off of the Summerslam card.

The Opening Segment–  I loved the way that they did the opening segment last night as it reminded me of segments from back in the attitude era.  Having Triple H and Stephanie come out to set up the entire night full of matches (I believe they listed the four matches for the night) was a great idea as it gave the viewer a reason to remain tuned in and a lot to look forward to over the course of the show.  Say what you will about the Authority but when they’re on the screen, it does bring an extra added level of importance.

The Divas Revolution Is In Full Effect- Other than the main event between John Cena and Seth Rollins, the match of the night belonged to the Divas as Paige took on Sasha Banks.  I thought the match was very good and they ladies got about 14 minutes to really let their match unfold and the story develop.  It made sense for Sasha to get the win as it continues to establish her and doesn’t hurt the more established Paige to take the loss.  I also thought the tag match was very good in that Becky Lynch was profiled, I believe for the first time on Raw since being called up.  It was also cool to see Lynch (again no relation, sadly) get the win and then moments later WWE put up a graphic for a one on one match between Nikki Bella and Becky Lynch for this week’s Smackdown.  This made the whole room of people I was watching the show with go “oh wow set the DVR for Smackdown”, which has to be what WWE was going for.  All in all, the divas got about a half an hour of Raw and two matches again this week.  The divas division continues to have a renewed focus and I’m excited to see where it goes from here.

Overall, i really enjoyed Raw this week as they continue to focus a good portion of Raw on more of the in ring product which is nice to see.  We also saw many of the stories going into Summerslam progress with Bray Wyatt cutting a promo reestablishing the Wyatt Family, the continued tease that perhaps Arrow will get involved in the Stardust and Neville feud, the buildup of the tag team division, the Kevin Owens-Cesaro feud and the Randy Orton and Sheamus feud.  I like the focus that WWE is putting on every match heading into Summerslam, it makes the show feel like the Wrestlemania of the summer.  I honestly had no problem with the Undertaker and Brock Lesnar not being on the show this week as the brawl from last week was so good that I feel it was OK to have a week reliving the brawl.  At the end of the day, Brock Lesnar and the Undertaker were both taken out of the building in handcuffs last week, so having them return this week would have been too much.  Besides, WWE already did a good job in promoting that Brock will be back next week, then you have Taker return the week after that and have both of them return the week before Summerslam.

That’s going to do it for me today but what did you think of Raw?  Are you excited for Summerslam?  I’ll be back later today with the Tough Enough Power Rankings.  Tough Enough airs tonight on the USA Network and it’s being promoted that Sasha Banks, Tamina Snuka and Naomi will all be on hand.