The Sights and Sounds of Wrestlemania!

Nothing like seeing a Wrestlemania Banner at Baggage Claim!

This is the first time over the past three years in which I’ve been flying to Wrestlemania that I was able to get down to Wrestlemania on a Thursday and I can honestly say that this is the day to come down if you’re going to do it.  For one, most fans arrive on Thursday and so you really feel like you’re all heading to Wrestling Haven together.  Everywhere you look fans are wearing wrestling t shirts and carrying memorabilia for the show.  My girlfriend made me a really cool Chad Gable towel that I carried around with me at the airport and was a big hit with the other fans attending the show.  Unfortunately, the security checkpoint was horrendous at Laguardia Airport.  Seriously people need to learn how to take off their shoes, belts and have their laptops ready for stowing prior to getting up to the checkpoint.  I realise that when you travel as much as I do you become Geroge Clooney (In Up in the air) esque in being able to fly through the airport but really some people really slowed us down.  We were so delayed that we almost ended up missing our flight altogether and had to jet to our gate once we finally got through. When I finally got there I let out a big sigh of relief and I heard a familiar voice greet me by saying “That’s ok let it out, you made the flight and now it’s officially Wrestlemania, nothing else matters!”.  It was WWE hall of famer Howard Finkel who happened to be on our flight (You can go back and read my post about meeting Howard at a Dean Ambrose signing to get an idea how big a fan of his I am).

Once you arrive in the city, it’s all about Wrestlemania! In the past the airports have been decked out in WWE decoration.  It literally feels lke if you’ve ever flown into Orlando and taken the Magical Express back to Disneyworld except instead of the world of magic, this is the world of wrestling.   I’ll never forget when we landed in New Orleans a couple of years ago and were greeted by a brass band playing John Cena’s theme song.  Or last year when we were greeted at the airport by Dean Malenko.  This year, we ended up flying into a smaller airport in Dallas so there wasn’t as many Wrestlemania signs at our airport but enough to let you know that you arrived and it was Wrestlemania.

My girlfriend Eri, excited to see the boss get her own Wrestlemania city banner

What we do each year is start our week off at the  with a trip to the Wrestlemania store.  We did this on Friday morning and it was a lot of fun.  If you have time to set aside for the store, I suggest doing it as a separate time then axxess.  If you’re like me, you’re pretty tired after Axxess and the store is so big that there is more than enough to do there to spend an hour of time there on it’s own.  As we walked up into the Wrestlemania store, every nearby street post had a different superstar banner hanging proudly.  Everyone from the Rock to The New Day to Charlotte were represented proudly.  By the entrance of the Kay Bailey Hutchison Center, there were a number of larger banners with every superstar you can think of taking up their spot on the walls of the building.  These are always great for some photo ops and to go and see all of the different decorations.  The KBH center was the home for all things WWE this weekend and there were just loads of fans everywhere.

Fans from all over the world take to the WWE Superstore

As we made our way upstairs into the actual store, there was a large WWE painting booth featuring the great work of WWE artist Rob Schamburger.  Rob is always on hand at Axxess working hard creating his next masterpiece.  Even though he’s hard at work, Rob is always very gracious and down to earth.  He’ll always stop to talk to you and is glad to sign any painting that you purchase of his.  Rob started out as a fan and has been embraced by WWE for his talent but is still a fan at heart and just an all around great person. 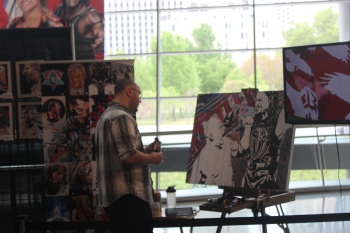 The store itself is a sight in an of itself and a reminder to us long time fans of what the old WWF New York Store used to be like back in the day.  There are different types of shirts everywhere you look, whether it be related to the members of this year’s hall of fame, the NXT Roster, the premier matches on the wrestlemania card or Wrestlemania event specific shirts they have everything you can think of.  The people working the store are also generally pretty cool about letting you pose for photos in the different masks (who woudn’t want to take a photo as Asuka or a couple photo as Gold and Stardust?)  or hats.  Decked on the walls of the store are different images of the WWE superstars and divas wearing all of the different memorabilia for sale, which always reminds me of the old superstar catalogs in the old WWF magazines.  The store also has some rare pieces of merch that you won’t find anywhere else like the new Sting Defining Moments figure that won’t be released for months or the new John Cena coffee table book(my favorite are always the replica Slammy and replica Undertaker’s Urn).  Lastly in the center of the store is your high end pieces of merch that can go from anywhere from $90 to $3500.  These range from signed figures to plaques featuring event used mats or even a replica winged eagle scale belt.  While it’s not realistic to expect everyone to have the dispsobable income to afford such pieces, they are great to look at.

Checking out the NXT section of memorabilia, surprised they didn’t have one of these Chad Gable towels on sale, which my girlfriend was nice enough to surprise me with before going. 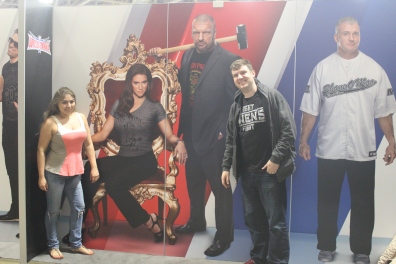 Two great couples, eh?  The Authority & Tom/Eri…by the way you all know what a huge fan of Shane McMahon I am but could he look more awkward on the wall of the superstore here? 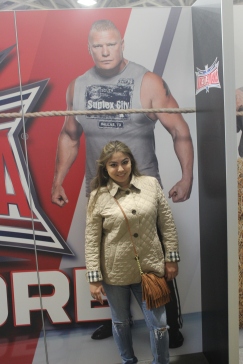 Eri is a proud resident of Suplex City! By the way, I can’t believe Brock agreed to pose in his T shirt for the store.  Pretty cool! 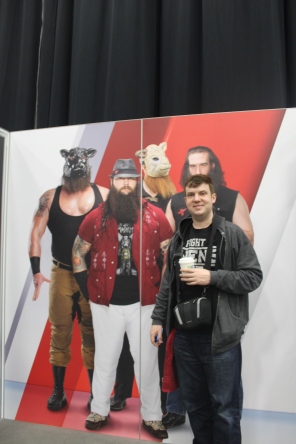 The Black and White Wyatt masks are two of the more popular items available for sale at the Superstore! 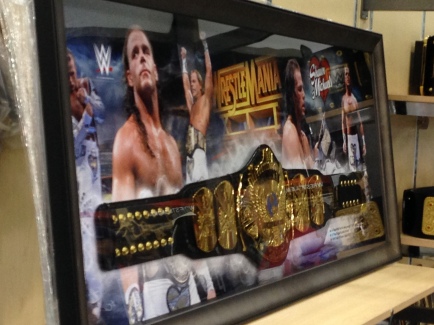 It doesn’t get much cooler than these high end plaques which will run you $1500!  That said, such a badass replica belt and Wrestlemania 12 Tribute! 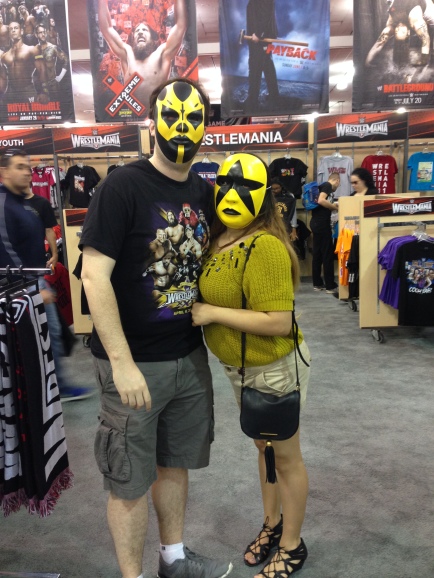 If you noticed that we look a little different, good job this was taken last year but nothing beats a Dust couple photo and the Rhodes masks join the Wyatts and Kalisto as the most popular this year. 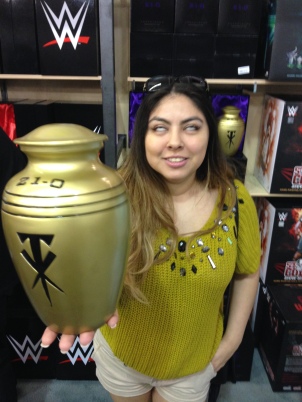 At some point I will justify dropping the $40 for one of these urns and yes this photo is here because my girlfriend can do picture perfect Undertaker Eyes and I think that’s pretty cool!

One frustrating piece was that the wristbands for the free superstar signings were given out randomly 2-3 hours prior to the signing but there was no way of knowing that ahead of time.  Thus we showed up at 11:30 hoping for a chance to see Sheamus or Kane (one of my girlfriend’s favorites) and were told we needed a wristband to wait on their line and the bands were all given out before 10AM.  That said, it was still cool to see both Sheamus and Kane on hand in the store, who were in years past VIP only signings at Axxess.

“The Celtic Warrior” Sheamus awaits the fans at the Wrestlemania Superstore

That’s going to do it for me for right now but I want to take a minute to thank WWE and the folks running the superstore for letting us run around the store like kids and try on a number of the pieces for sale.  Tomorrow, we’ll take a look at WWE NXT Takeover, one of the best events of the entire weekend.