Skip to content
HomePosts tagged 'WWE at the Garden preview' 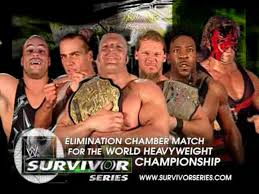 2002 has to be the most under rated year for WWE, you had the debuts of John Cena, Randy Orton and Brock Lesnar, you had the in ring returns of Hulk Hogan and Shawn Michaels and you had one of the most impressive mid cards ever to take place in the WWE. 2002 was also a year in which I attended my first live WWE pay per view when a buddy and myself went to the SummerSlam 2002 at the Nassau Colliseum. I’d say it was the year that I also got really into live pay per views because to me there was nothing like a live pay per view. It was just such a great atmosphere. Thus, when I turned 16 that October I was pleasantly surprised when my parents got me two tickets to the 2002 Survivor Series! This would be my first pay per view ever to come live from Madison Square Garden and to say I was excited was the ultimate understatement. The only question left was who I would take with me to the show. I was heavily involved in my own basement wrestling federation (sad I know) at the time and I already had a blast at SummerSlam with my buddy jimmy but I was suddenly now torn over a few buddies who wanted to come with. After much deliberation, I asked my father to come with me. My father’s interest in wrestling had started to wane but he had taken me to my very first wrestling show at Madison Square Garden so I thought he’d be the perfect person to attend my first pay per view at the garden with.

What was also cool about that birthday was that I had also got an autograph ticket from my family to meet Shawn Michaels in Howard Beach at Video Game Central the night before the Survivor Series. This time my mom was coming with as Shawn was always her favorite wrestler. This was Shawn’s first title match since his return to the WWE at Summerslam of that year and, to me anyway, he was the focal point of that event. It was crazy to have Shawn at this autograph signing only 30 minutes from my house and one of the truly starstruck moments of my life. I remember it was pouring rain and blistering cold out in the November New York weather. Despite this and despite my mother just getting out of surgery, my mother stayed on that line with me and my buddy for three hours to meet Shawn.  Ever the professional, I distinctly remember Shawn telling me after I wished him luck, “Thanks bud, many think I’m nuts to compete in such a big match and honestly I don’t know how many more of these I have in me.”  He went on to wrestle for another 7+ years.

As for the event itself, I remember that this was the first show I had attended at the Garden since 9/11 the year before and the security was insane.  I had to remove my hat, people were being asked randomly to remove their shoes and my dad was asked to remove his cell phone and flip it open (remember flip phones?) for some reason.  It took forever to file into the Garden that night, but once we finally did get in, it was sure worth it. The guys at Busted Open Radio (which airs 2-4pm Monday, Wednesday and Friday on Sirius/XM 92) actually did a live tweeting of this show last year and it reminded me of what a great show this was, despite the fact that there weren’t any traditional survivor series matches on the show.

One of the other big things about this show was the debut of Big Poppa Pump Scott Steiner who debuted for the company that night following the expiring of his contract from WCW (18 months after WCW closed it’s doors I might add).  I know that Scott’s WWE career at Big Poppa Pump didn’t really go anywhere but go back and watch this debut, he was over huge.  Surrounding that debut was also a lot of fun I remember going nuts because I was a huge Matt Hardy fan (always one of my favorites to this day) and I also loved the RNN News skits which featured Randy Orton promoting his return, he was so good even at 22 years old.

If there was one man in WWE in 2002 that defined the year, it’d perhaps be the same man who’s synonymous with WWE in 2014…Brock Lesnar.  I remember the Garden crowd being so into Brock and at the time he was the WWE champion and still undefeated.  This obviously was the night in which he lost due to Paul Heyman turning on Brock.  That turn stunned the crowd and I remember after Brock hit the F5 people started celebrating thinking it was over only to have Paul yank the referee. To this day, it still amazes me whenever Brock lifts the Big Show with such ease and I can tell you I’m looking forward to their match tonight.

In the end, I remember being really excited for the Elimination Chamber as it was the first Chamber match in history on this show and look at the six men in the match.  A who’s who of hall of fame level talent in Triple H, Shawn Michaels, Chris Jericho, Kane, Booker T and RVD.  This was the match in which RVD landed a five star frog splash and crushed Triple H’s larynx.  I also remember, other than Shawn, Booker T may have been the most over man in the match.  My father and I had a great time doing the “5 Time!” routine in the crowd with our entire section.  In the end, Shawn Michaels (proving to me he was in fact playing me the night before, which I couldn’t be happier about) won what would end up being his final world title reign in WWE.  As the confetti rained down on Shawn it was probably the best live moment for me as a fan until this past year’s WrestleMania.

All in all just a great and enjoyable show from top to bottom that more than holds up today as so much happened on that show it’s unbelievable to even think.  The show for me is memorable as it was the last show I attended live with my dad who’s interest in the product had really fell off then so it was the end of a 16 year era but what a finale we had.  That’s gonna do it for this review but it’s crazy to think we are gearing up for Lesnar and the Big Show some 13 years later on the Network tonight…and it should be great!