On last night’s episode of NXT on the WWE Network, a major announcement was made by William Regal that on July 4th the NXT title will be defended at Sumo Hall live from Tokyo, Japan.  More interesting, this live event will stream live on the WWE Network.  It was made clear today that not only will the NXT world title match be on the network but rather the entire show will air live on the Network.  Furthermore, the rest of the card was revealed today and on top of Owens vs. Balor, the rest of the card is as follows: John Cena & Dolph Ziggler vs. Kane & Wade Barrett, Brock Lesnar vs. Kofi Kingston, Neville vs. Chris Jericho, The New Day vs. Tyson Kidd & Cesaro, Nikki Bella vs. Paige vs. Naomi, and the Lucha Dragons vs. Los Matadores.  I think airing this live event on the network is a great idea, let’s get into some highlights about why I’m so excited about it.

More Original Live Content On The Network- I said it from the day the Network launched, it is such a great idea to put the live events on the Network.  For those who don’t know, WWE doesn’t only tape Raw on Mondays and Smackdown on Tuesdays, but they usually have non-televised live events each week from Friday- Sunday, sometimes on Thursdays.  Now while I don’t think it’s necessary to put every single live event on the network, airing some of the live events on the Network provide the paying customer with even more wrestling.  It also makes those paying for the network, feel like they’re getting to see live programming that they normally wouldn’t be able to if they weren’t subscribed to the network.  I hope to see more of these non televised live events live on the network particularly some of the bigger shows like the Superbowl afternoon show, Hulk Hogan Appreciation Night and the annual fan appreciation night. I don’t think WWE even has to make changes to the live event structure, save for adding commentators.  I don’t think they need to restructure television to promote these shows either.  I think a few mentions of the show either on commentary or through commercials should be fine.  It can literally be something like Michael Cole saying  “And the WWE will be returning to the TD Bank Garden live in Boston, Massachusetts on the final stop on the road to Wrestlemania and you’ll get to see Roman Reigns and John Cena team up to take on Seth Rollins and Triple H and you’ll be able to watch the show live on the WWE Network!” I mean at least I’m Sold!

Live Events Just Became That Much More Important- Airing live events on the network also make the actual live events seem like a bigger deal, at least in my opinion.  One of the reasons I’ve always preferred to go to TV Tapings over a live event is because of the idea that anything could happen.  With the exception of very few instances, titles don’t change hands for example but with these shows now being on the network, it feels like anything can happen once again.  It’s also good to have one or two matches on the show that mean something, like Owens vs. Balor for the title, for example, or maybe do a number one contender match with the winner getting a shot on Raw the following week.  This would make me as a fan, feel like I need to go down to this live event.

This show is stacked- Let’s not kid ourselves, this Sumo Hall show is also going to be a show worth going out of your way to watch.  First you have Kevin Owens defending the NXT Title against the number one contender, Finn Balor. With Owens now being a member of the main roster, I wouldn’t be too surprised at all if we see a title change here.  On top of this you’re getting the first non-pay per view match featuring Brock Lesnar since his return, in a unique setting no less taking on Kofi Kingston.  Then you also have a rare appearance by Chris Jericho who hasn’t been seen on WWE TV in about 9 months.  Jericho is also taking on Neville in something of a dream match that the Japanese fans are going to love. 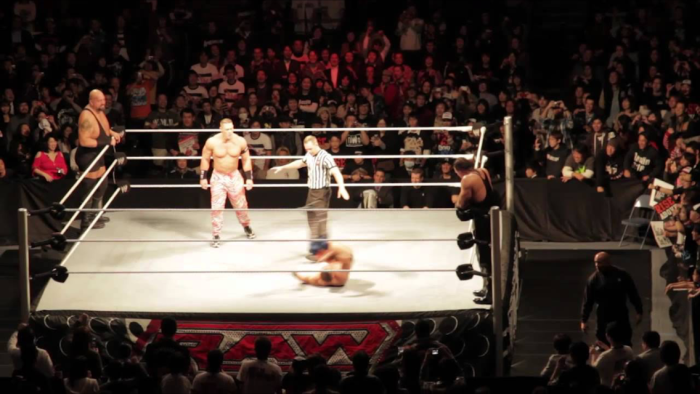 Something Completely Different- One thing I’m really looking forward to about this show is that it’s going to be taking place live from Japan.  WWE puts on shows all over the world and up until this point I’m not sure they’ve ever aired a live showing of a Japanese live event in the US.  I hope this is only the start of seeing some of the live events from other countries.  I’m really interested to see the differences in the setup, the differences in the crowd and the differences in the performances of the talent.  I also love that this show is going to air live at 630AM on the network.  I will definitely be up, coffee cup in my hand ready to kick off my 4th of July with a WWE live event and that is pretty cool.

At the end of the day, this is more live content on the WWE Network which is always a good thing.  I think we’re getting to a point where we can expect a Steve Austin Podcast, WWE Traditional Pay Per View, WWE Live Special (Elimination Chamber, King of the ring, etc), WWE 24 Documentary, and a variety of other specials on the Network each month and that is a great thing. It’s nice to see that WWE continues to make the Network the top priority and that’s one of the reasons I continue to be a subscriber, from day one.  That’s going to do it here but let me know your thoughts on the special and what other types of specials you’d like to see on the WWE Network in the future.