I can’t believe that we are less than one week away from the 2016 Royal Rumble which is actually the 25th anniversary of when I started to watch WWF Pay Per Views live.  The Royal Rumble 1991 was the first pay per view I remembered ordering at the ripe old age of just four years old.  From that moment the Royal Rumble has always been my favorite WWE pay per view and I’ve always enjoyed going back and watching all of the old Rumbles.  For me, a good rumble is the one match that any non wrestling can sit back and watch while being thoroughly entertained.

With us being just a little over one week away from the Royal Rumble, i thought it might be fun to take a look back through time and review a number of the different Royal Rumbles from years past, similar to what we did here on the site with the Survivor Series.  This is going to a unique perspective on the different shows in that I may talk about some moments or some matches but i’m mainly going to review each show as I remember watching them as a fan over time.  A number of these shows I attended live and so those will obviously be longer entries but I’ll try and offer you the best coverage of each Royal Rumble and hopefully get you excited for the big show on January 24th.  Without any further ado let’s kick this off with a look back at the Royal Rumble 1988, the inaugural edition of the show.

When looking back at the first Royal Rumble, it’s important to remember that this was just a television special.  WWF decided to put the rumble up against the NWA Bunkhouse Stampede pay per view with the idea that if people could get a free show on cable, they would prefer to watch that show over a show they had to pay for.  Thus, the Rumble was much less extravagant than it is today.  The television special was actually much more centered around a Hulk Hogan/ Andre The Giant rematch for Saturday Night’s Main Event a few weeks later than it was around the actual Rumble match.  Of course the Hogan/Andre rematch would be the infamous match in Andre won the title and sold it to The Million Dollar Man Ted Dibiase, leading to the tournament for the title at Wrestlemania 4.

The other part of this Rumble that I always found funny was the weight lifting challenge in which Dino Bravo was attempting to break the bench press record at the time.  The challenge seemed to have gone on forever as they continued to add more weight piece by piece in 5-10 lb intervals.  Aside from that, the Royal Rumble wasn’t even the main event of the show.  Instead, it was placed in the middle of the show and a random 2 out of 3 falls match took place between the Islanders and the Young Stallions in the main event of the evening.  It was a largely forgettable main event as I couldn’t even tell you who won off the top of my head, just that it was much more about how the Islanders had stolen Matilda, the dog of the British Bulldogs, then the match itself. 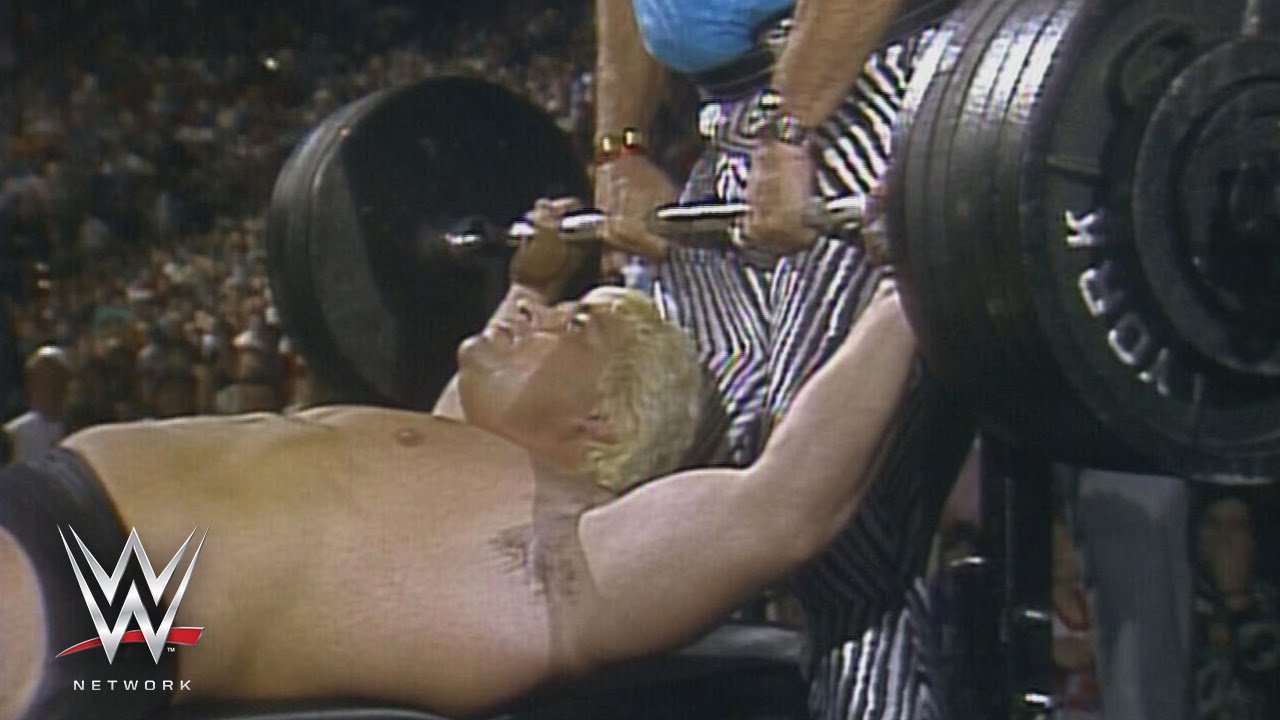 Photo Credit: WWE Network
As for the Rumble match itself, the Rumble only had 20 participants as opposed to traditional 30.  The match was won by Hacksaw Jim Duggan who won…well, nothing because they hadn’t established the match being for a title shot at Wrestlemania yet.  Looking back and looking at the participants, I was surprised to see that Duggan was the guy chosen to win the match because there were bigger names in there like Jake Roberts and The Ultimate Warrior.  Speaking of Warrior, he would only last a little under 4 minutes in the match so this was very early on in his WWE tenure, perhaps before big plans were even thought of for him.  The iron man of the match, was Bret Hart who would go on to last over 25 minutes after drawing number one.

Photo Credit: Top Rope Press
In the end this was good to go back and watch this show for nostalgic purposes and to see how the Rumble got it’s start. When I was a kid, I was raised on the fact that the 1989 Royal Rumble event was the first one ever so I was actually a bit surprised to see this show on my Royal Rumble DVD Anthology when I purchased that in 2007.  Of course nowadays, the Rumble 1988 can be found in the on demand section of the WWE Network.
That’s going to do it for now but be sure to keep your eyes peeled as we continued to take a look back at Royal Rumbles past.
Advertisement